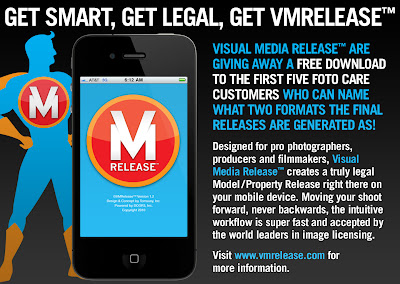 Visual Media Release™ are giving away a free download to the first 5 Foto Care customers who can tell them what two file formats are generated with the final release! Check out the Foto Care blog for more details and to read their review!
Posted by VMRelease ™ at 11:47 AM No comments:


Tom McGhee, creator of VMRelease introduces the benefits of using his new Model / Property Release App for all image makers on the go.

VMRlease available for download today at the Apple App Store.
Posted by VMRelease ™ at 5:41 PM No comments:

Did you know that as a Flickr contributor you could also submit your images to Getty Images and make some Cash...

I recently meet with Gettys Head of Content North America, Andrew Delaney at their New York office and while showing Andrew the latest version of our VMRelease™ V1.2 Andrew mentioned that Gettys are very excited to have content from Flickr shooters to use in various forms for Advertising via both mobile and online delivery as well as traditional print.

Release Me!
He also mentioned that one of the most important components to submitting your images via Flickr is that Getty could only use or sell the images if the contributor (Photographer) supplies a legal Model or Property Release along with their images in the form of a jpeg or PDF.

We both agreed that this is where the VMRelease™ App comes into play creating both a jpeg & PDF version automatically. As you always have your phone with you, you always have the VMRelease™ available to capture/create/store and send Model/Property Releases for use in submitting your Flickr images to the world leader of image content.

Go to http://www.flickr.com/groups/callforartists to find out more on being a Flickr / Getty Contributing Photographer
Posted by VMRelease ™ at 7:21 AM No comments:

Our Releases are Free!

A photographer asked me the other day...

"Does VMRelease™ charge per release as another application that is free to download does?"

My answer was simple "Never, no,  nadda"you kidding me no way! You pay a one time fee to download the App then create as many as you like for FREE!"

We at VMRelease™ believe in true transparency and no hidden fees, that's just not nice... it's a little bit like trickery.

It's like saying here have this free app then when you get on set or location to use it you are hit with a fee per release. We at VMRelease™ don't believe in the "pusher" way of working with our valued customers, we prefer to put everything up front right from the get go.

VMRelease™ gives you the freedom to create and send /store as many releases as your little thumbs can hammer out!
Posted by VMRelease ™ at 8:26 AM No comments:

Keep up to date with the VMRelease creator Tom McGhee and his community via twitter.

Come follow Tom as he brings you the latest news happening within the Photo / Film industry whether it be a art show, film festival, photo exhibit or shoot share in the experience via our twitter feed.
Posted by VMRelease ™ at 1:36 PM No comments:

Promote Your Page Too

VMRelease ™
Create Fast - Intuitive - Legal Model / Property Releases VMRelease™ App created for professional photographers and Filmmakers by a professional photographer, is the worlds first total digital solution for all image makers to create, capture, store and send model/ and/or property release forms that will be accepted as a legal document. The VMRelease™ is serious about delivering a legal document in both Jpeg/Pdf formats that not only captures the models signature but also the witness and photographers signature within a work flow that has the approval of a world leader in image licensing. Accepted by Getty,Corbis/Veer,Alamy,Image Source along with many other world leaders. Create,Store,Send and Delete all from within your mobile device.